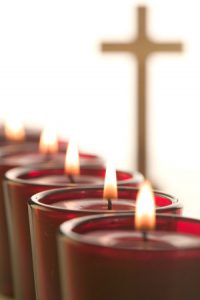 Funerals and Memorial Masses are arranged through our parish office.

The Funeral Reception Committee is sponsored by the Knights of Columbus Council 1186 of Sacred Heart Parish. We provide set-up and tear down of the reception room and can provide the following menu items;

A podium and microphone is also available for Memorial presentations.
There is a charge for this service to offset the cost of the menu and provide a fundraiser for charitable activities of the Knights of Columbus.

Members of the community are encouraged to attend funerals as our show of solidarity with our bereaved families and as part of doing a great work of mercy.

Some people do not know whether Catholics are permitted to be cremated. The answer is simply: yes, they are.

Some may remember that at one time Catholics were prohibited from having their bodies cremated. For a time that was true.

Early Christians followed the Jewish practice of giving honourable burial to the dead. They did not use cremation. These early Christians made great efforts to retrieve the bodies of their martyrs and bury them with honour, as one can see in their catacombs. In Christian countries the “pagan” practice of cremation more or less disappeared. In fact, it was made a capital offense by civil authorities such as Charlemagne through his law in 789.

In the latter part of the nineteenth century various groups introduced the practice of cremation in Europe, where for many centuries the Christian custom of earth burial had been the only way to dispose of the bodies of the deceased. The Church suspected that the motives of those promoting cremation were anti-Christian, and therefore, in 1886, the Church forbad Catholics from directing that their bodies be cremated and legislated that any Catholic who did so was to be denied a Catholic burial unless there were signs of repentance before the person died.

Cremation as such was never seen as incompatible with Christianity, but it was the motives that were suspect. When it became apparent that cremation was also being promoted by some non-Catholic groups for reasons that were not anti-Christian but rather to confront materialism and as denial of death, the Church, in 1963 lifted its pro-hibition. Therefore Catholics are free to choose cremation for any reason, unless it is for reasons that are contrary to Christian teaching (Code of Canon Law, 1176 S3).

People choose cremation for many reasons: hygiene, lack of space for earth burial, economic reasons, etc. In some situations cremation is the only option, for example, when a body is almost destroyed in a fire or when the remains must be transported any distance. If cremation is chosen for economic reasons, remember that the differences in costs are relative only. There are still costs involved in cremation. It is a good idea to ask at funeral homes about these costs, even when there is no funeral imminent.

Cremation and the Liturgy

The full celebration of a Christian funeral consists of three main rites or “stations”: The vigil for the deceased (the first time the community gathers to pray and listen to God’s word), the funeral liturgy (either the funeral Mass or a liturgy of the word), and the rite of committal normally celebrated at the body’s final resting place. All three of these rites should be celebrated whenever possible.

The Church has always expressed its belief in life after death and in the resurrection through its care in preparing the body for burial. The prayers and gestures used in the liturgy show its reverence  for the deceased Christian’s body, which the Church considers sacred because it has been a temple of the Holy Spirit and has shared in the Eucharistic food of Jesus himself. Because of its reverence for this body, the Church still prefers the traditional earth burial in a grave or tomb in memory of Jesus’ body being placed in a tomb.

However, if cremation has been chosen, the Church will celebrate the funeral rites, unless there is evidence that cremation was chosen for reasons contrary to Christian belief. There are three options in this case.

When cremation takes place after the funeral liturgy

The Church prefers the option of having the cremation take place after the funeral liturgy in order to celebrate its three principal funeral rites in the presence of the body; it can then show to the body the reverence it always has through the signs that have long been part of the Church’s tradition.

The vigil for the deceased and the funeral liturgy are celebrated as usual, with a slight change in the final commendation after the funeral liturgy to indicate that the procession with the body will proceed to the crematorium and not to the cemetery.

When cremation takes place before the funeral liturgy

Because of the 1984 indult granted to the Church in Canada by the Congregation for Divine Worship and the Discipline of the Sacraments, the funeral liturgy, including the eucharist, may be celebrated with the cremated remains of the deceased person present. There are some conditions, namely, that the cremation was not inspired by motives contrary to Christian teaching and the the bishop of the diocese agrees that it is pastorally proper to do so.

The cremated remains, put into a dignified container that shows reverence toward the person’s remains, are placed on a small table provided for this purpose. The liturgy will conclude with the final commendation. Signs of reverence toward the body, such as the sprinkling with holy water and the use of incense, may be used. The interment of the remains may then follow the liturgy or take place at another appropriate time.

The great respect the Church has for the bodies of its deceased should also be evident in the way the cremated remains are treated after cremation. This means that they should be put into a worthy container, and all who handle them should treat these remains with care and reverence in the way they are transported and where they are placed.

The Church asks that, in keeping with a spirit of reverence, the cremated remains be buried in a grave or entombed in a mausoleum or a columbarium (a place for the entombment of cremated remains), that is, in a place especially designated for this purpose and reserved as such.

In additions, a specific place for a person’s remains helps focus the remembering and prayer for the deceased person by the family and friends, and by the Church in general. Also, such a place will make it easier to memorialize the deceased, for example, with plaques which record names and dates.

Scattering cremated remains on the sea, in the air, on the ground, or keeping them in homes of relatives does not display appropriate reverence, and the Church does not offer a prayer service when that kind of disposal has been chosen.

Scattering the remains in a location that was once the place where the individual spent time may seem emotionally satisfying at the height of mourner’s grief, but one should ask this question: Does the desire to scatter the remains on a favorite spot display a tendency to look backward at a life that has passed rather than to look forward to a new dimension to our life with God and to the resurrection of Jesus and in life after death might suggest a more permanent resting place for a Christian’s remains.

Families are encouraged to approach their pastor or a pastoral minister regarding arrangements for funeral services before they make plans with a funeral home. This is even more necessary when cremation is to be used. Funeral liturgies are for the living and are a vital part of the grieving and healing process. They give families and friends a formal way of remembering and saying goodbye. No one should omit having at least some type of funeral service.